Easy Power D-Power Grip
You spend 70 minutes at the driving range today again.
Golf is easy at first, but it gets harder the more you try to get to grips with it.
One day, if the driver works well, the iron clubs don't. And if the iron clubs work the next day, the driver won’t.

Why is it so?
Hence the saying "Children and golf are beyond your control regardless of how much money you have."
So golf is also the only sport where skill is sometimes not tuned up by experience on the course.
And its where seniors get beat out by juniors.
Why is golf hard?
*Because a good grip is hard? * Because backswing is difficult? * Because your impact is weak? * Because you cannot relax?
All play a part.
But grip is key.
It is because you practice golf without understanding correct grip.

Golf rests on the grip.
Professional golfer Choi Kyung-ju confirms that says 90% of golf success rests on the grip.
Many amateur golf players, after playing for the first time, think grip is simply a tool to hit the ball. They think only of the process of hitting the ball and forget the importance of the grip, and are obsessed with swing.
They are preoccupied with the hope of a long drive.
Not many amateur golfers know exactly what the grip does.
They just think of it as a tool to prevent the golf club slipping or not hurting their hands.
To be good at golf, you need to understand the principle of grip and how to use it correctly
Golf is based on principles of physics.
Following the laws of rotational acceleration and action-reaction, the head is the point of action with force transmitted through the grip, and the ball is the point of reaction. Whatever force is applied to the point of action, the same force is transmitted to the ball at the point of reaction.
Golf is based on the principle of producing and using kinetic energy from rotation at the center of the axis. Fast rotation is key to maximizing power and energy.
Long distance is the dream of so many golf players.
Distance is in important correlation with accurate impact and wrist cocking.
A valid way to create these two is to use a grip similar to when grasping a wet towel without squeezing.
But while many amateur golf players are theoretically aware of good grip, the main reason they can't achieve one is that the club turns at the top of the backswing due to its weight. This results in inaccurate impact and a very firm grip. It’s like squeezing the grip momentarily to prevent the club from turning causes the cocking to be released early, which results in a loss of distance.
Immerse yourself in driving range practice again today after understanding grip.
As soon as you pull the club down from the top of the backswing with your shoulder relaxed and a light grip, the golf club turns and the ball flies off in the wrong direction.
You hit it with a firm grip this time, but the distance is cut in half.~~
Isn't there an easy grip out there for effective play?
Adjust your thinking just a little and you’ll see it!
A New Concept in Golf Grip, “Easy Power”
There is a story about the birth of the easy power grip.
It's a story about a golf player who has been playing for over 20 years and thinks he knows the game well. He’s participated in amateur competitions, embarrassed himself when he panicked during a game, and decided to quit golf due to the shock.
But for more than six months, he practiced using all kinds of methods without knowing the cause. And so the result was unsatisfactory.
Then he quit golf. After looking at other sports for a while, he returned to the game. He eventually swung with the right posture again and felt he was back to his best.
He’d realized. The problem was his grip. The key to the game of golf is grip.
Golf should be an enjoyable experience of walking and exercising out in a country environment to cleanse the mind. However, many golf players come under stress whenever they reach the course.
You shouldn't spend so much time paying expensive fees only to get stressed.
Let me introduce the Easy Power Grip which will put your mind at ease. 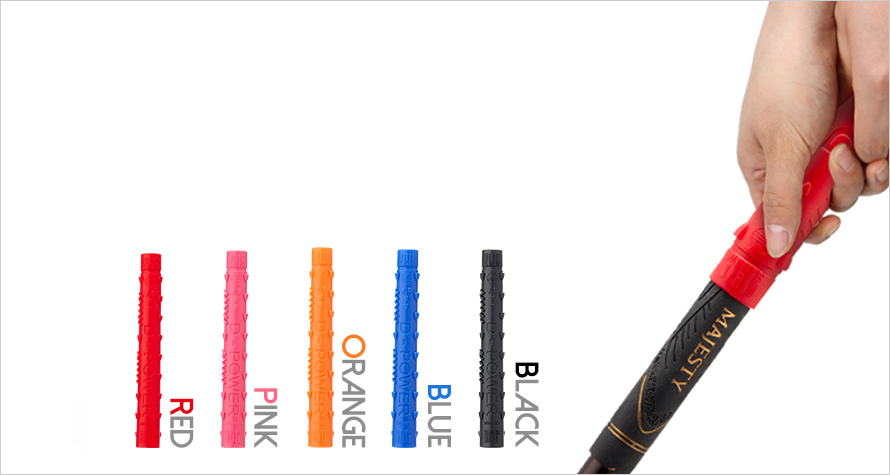 What kind of golf grip is "Easy Power"?
· A new concept grip with a soft, heat-resistant silicon material, which can be used without gloves
· A new concept grip mounted on an existing golf grip with a five-step orientation to set the direction of the player
· A new concept grip that increases driving distance by enabling the golfer to control grasping power, set the grasp, and hold correct grip easily at all times
· A new concept grip that corrects the power and swing position by enabling to lightly hold the grip and make the most of the centrifugal force when swinging
· A new concept grip enabling balancing of both hands to generate fast head speed during downswing
· A new concept grip that extends the period of grip replacement due to natural wear by up to three times
· A new concept grip that any golfer can easily mount and adjust
What is the difference between the existing "Easy Power" golf grip and the new “D-POWER” grip?
Firstly, the design is completely different.
The existing Easy Power grip has the advantage of enabling golfers to hold an easy and solid grip because it has a standardized GASP pattern.
D-POWER grip is a non-standardized type that enables the golfer to feel the head weight when holding any form of grip, producing long driving distance and making it easy even for middle- to high-level players to feel enhanced skill. In particular, it is a third generation product very effective for iron clubs.
Is it effective in improving female golfers impact?
Many female golfers often have a weak grip and grasping force, often unable to get long distance due to lack of impact. The D-POWER grip is a very effective tool for increasing driving distance with strong impact and joint protection as it eliminates finger friction.
Women requiring more power and not feeling the weight of the head due to their gloves can protect their hands by wearing gloves on only one hand with this silicone grip that boosts power.
Talking of Grip leads to "D-POWER", the 3rd Generation New Concept Power Golf Grip.
· A club with a grip does not turn, creating a square impact. This helps to improve driving distance and directionality
· A grip enabling you to find the sweet spot which can be used without gloves
· A grip enabling you to hold it loosely, relax the shoulders, and extend the arms naturally. Thus effective in correcting swing posture
Manufacturing Process
In order to preserve durability, grip sensitivity, and tension, we manufacture manually using an extrusion molding method instead of injection molding.
This manual method incurs a higher manufacturing cost but works to ensure a higher grip sensitivity.
100% made in Korea product patented in major golfing countries and exported to the U.S. and Canada.
Specifications of Easy Power Grip
(All products are for men and women)
· D-POWER (for advanced and freestyle players)
· HITTER (for middle-level players)
· SWINGER (for teaching purposes)
· PUTTER (for putting only)
· Colors: Black, Red, Blue, Pink, Orange (Gray added for putter grip)
· Composition: Easy Power, Calibrator, Adjusting device, Installation Manual
· Material: Silicon
· Available for buying even one piece of each different product and bundle packaging is also available.
Type A: D-POWER+HITTER+PUTTER
Type B: D-POWER+HITTER
Type C: D-POWER+PUTTER
Type D: HITTER+PUTTER
Type E: D-POWER
Type F: as ordered 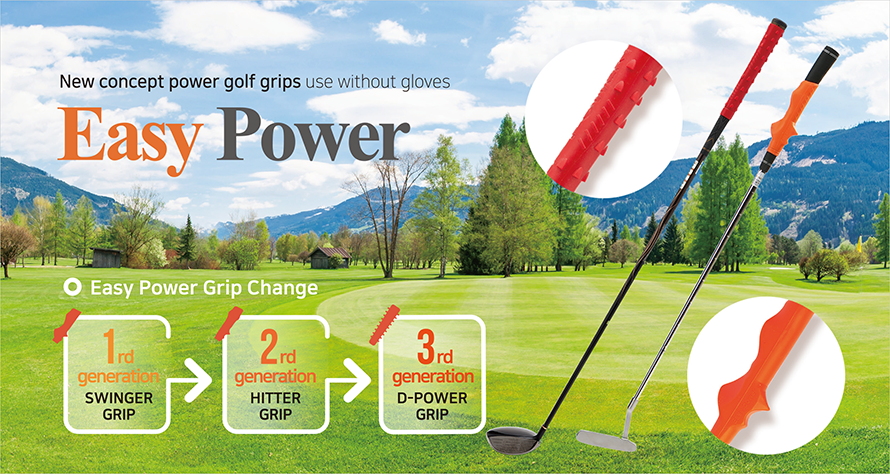 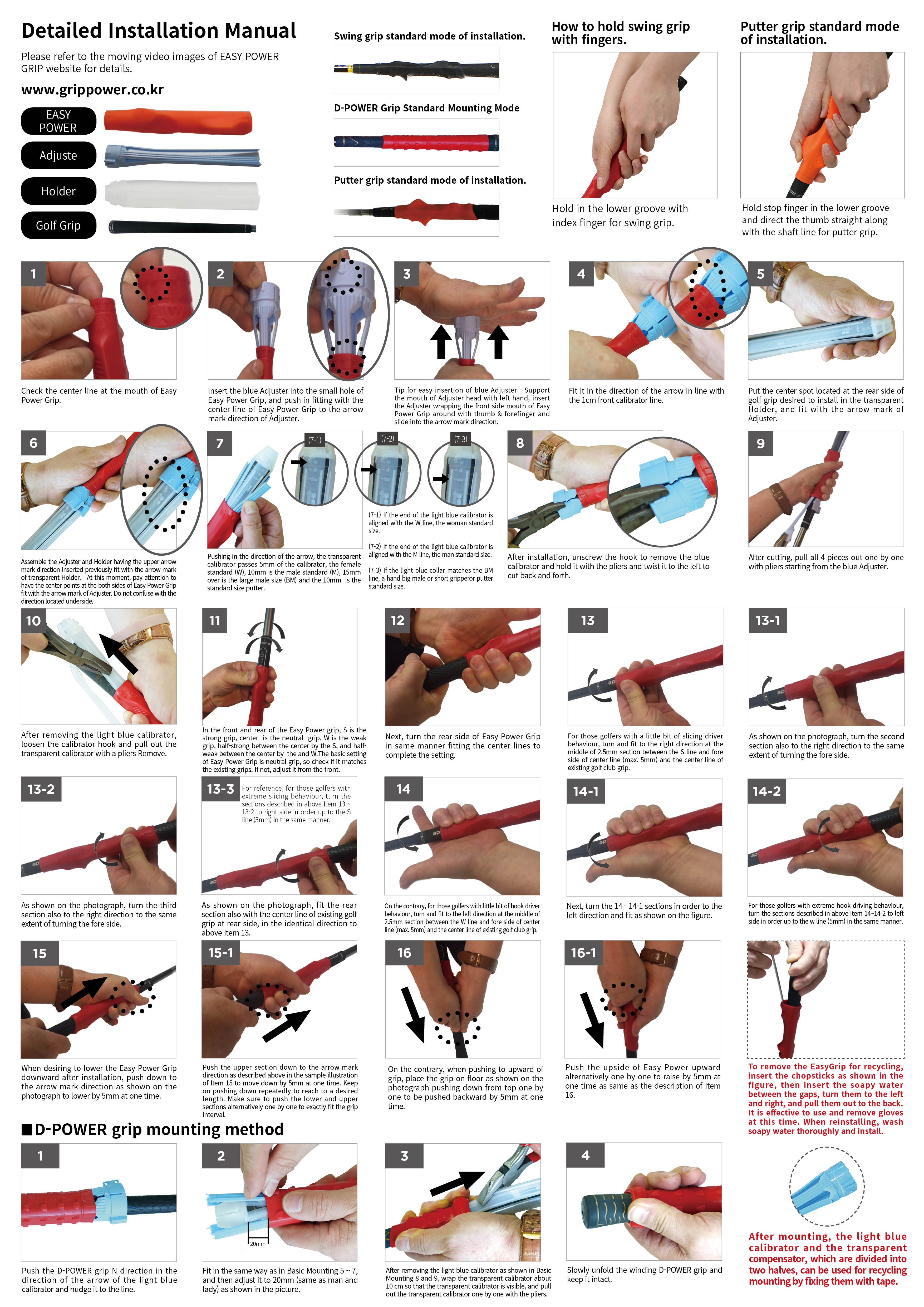 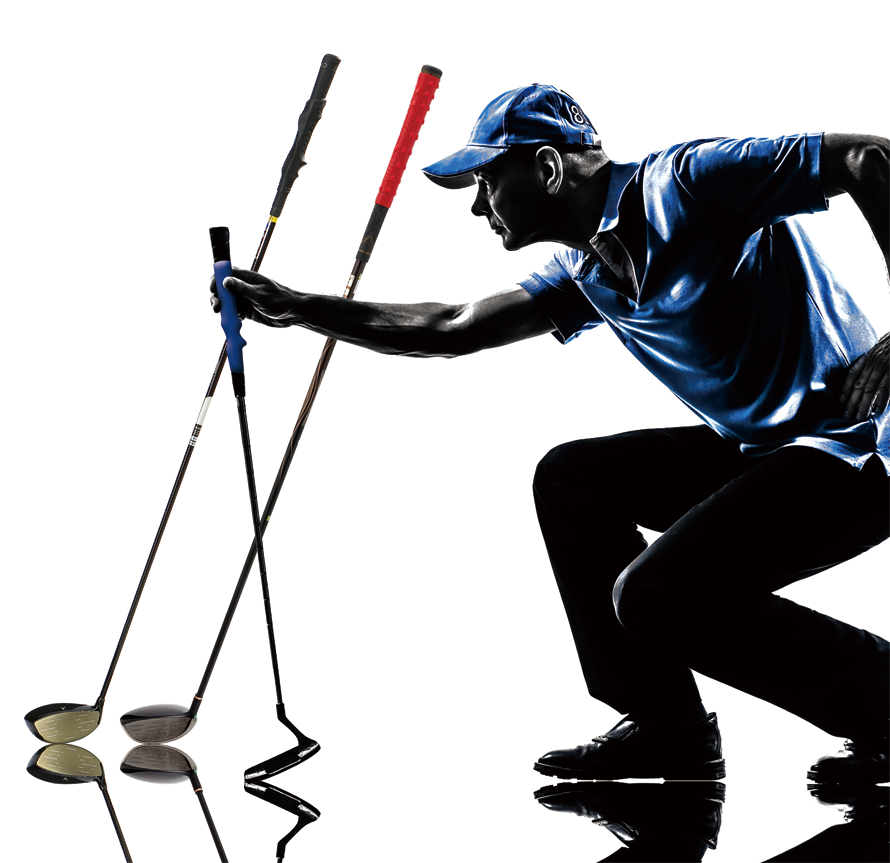